The right watch for any budget 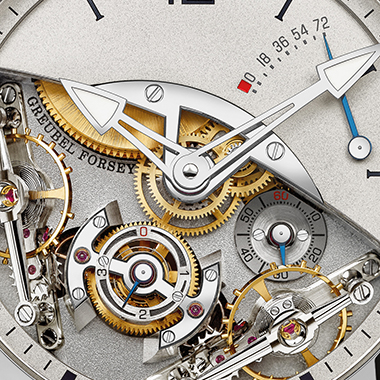 Swiss watchmakers offer such a wide range of watches that there’s something for every budget. A selection by price category.

As the boss of a Swiss watchmaking company used to say whenever one of his teams showed him a new piece: “Make sure that when you present me with a watch, its perceived value is at least twice that of its retail price!” An idea that makes good sense, both in business and watchmaking terms. Anyone who buys a timepiece should feel that they’re wearing something more valuable than the money they paid for it.

Except that “perceived value” is an inherently subjective concept. For a lot of people, it’s something irrational, intangible. It shows one’s attachment to a certain way of life. So acquiring a Speedmaster means identifying with the exploits of space exploration. Wearing a Panerai shows off one’s seafaring side. An Urwerk is the badge of an independent thinker. The list is endless. Marketing has as rich a history in watchmaking as the timepieces themselves.

For others, perceived value is intimately connected to the product and its technology, and not only to its history. The visual fascination of a tourbillon is such that there is no shortage of collectors willing to pay hefty sums for such a complication. In the same vein, the appeal of a Greubel Forsey watch lies almost entirely in its uncompromising technical characteristics. And the manufacture has never sought out ambassadors to represent it. A Greubel Forsey movement speaks for itself. Its price is high, but its perceived value is higher still.

Every buyer has a budget and every brand chooses its positioning. The art is in matching one to the other. There is no shortage of watches in the under 5,000 franc category. It is one of the most fought-over price segments, since it is adaptable to any market in the world. For well-off families, they are entry-level watches, while for the others, they are beautiful pieces that will last a lifetime. For their part, watchmaking brands see this segment as a wide canvas on which to express themselves.

Such is the case for Longines. The winged hourglass brand has historically and strategically occupied this niche. Its Conquest is an essential piece in the under 5,000 franc segment. It’s perfect for men and women alike. The same is true for Chanel’s famous J12, a star among unisex watch models.

For men, Omega’s Speedmaster is one of the few great watchmaking icons that is still priced – for some of its models – at under 5,000 Swiss francs. A legendary piece that has remained accessible, just like the latest Breitling models. This is also the case with TAG Heuer’s Monaco, a must-have in any collection. And no list of icons would be complete without mentioning Jaeger-LeCoultre’s Reverso, probably the most famous rectangular watch in history, or Cartier’s Ballon Bleu, an unfailing success.

For under 10,000 francs, the brands are essentially the same as those present in the previous category, but the models become more specialised. Jaeger-LeCoultre’s new Polaris collection, for example, is available in this price range with the Automatic and Date models. And some manufactures present a very wide range indeed in this segment, such as Panerai, with a number of their Luminor and Radiomir models.

One can also find brands that are not present in the entry-level range, such as Ulysse Nardin, Girard-Perregaux and Jaquet Droz, whose remarkable Grande Seconde is available in a steel version in this segment. The lowest-priced models from Parmigiani Fleurier, Franck Muller and Hublot can also be found here. And this is also the price range where we start to see manufacture movements from the prestigious brands, like Ulysse Nardin’s Marine Chronometer, for example.

This is the price range where fine watchmaking begins. Once one approaches 25,000 francs, the doors to prestigious names swing open, names such as A. Lange & Söhne with its 1815, or Audemars Piguet with its unusual and captivating Millenary model or the iconic Royal Oak. The same holds true for the Breguet Classique.

Once over 20,000 francs, a good number of gold watches are available for both men and women, like one of Cartier’s historic models, the Santos-Dumont and the Drive de Cartier. At this level, it’s also possible to purchase a piece with a diamond-set bezel, something that generally can’t be done at lower price ranges.

Every collector knows this segment by heart. Why? It brings together two essential and sought-after characteristics: manufacture movements and an initial level of complications. One could wear, for example, a model from Vacheron Constantin’s Overseas collection with a chronograph and a date, a large date from A. Lange & Söhne or even a Jaeger-LeCoultre Duomètre, whose two independent movements are highly appreciated by collectors.

It’s at this price range, too, where we start to see watches bearing the work of artistic crafts. We could mention the painting on enamel of Bovet’s Fleurier Amadeo, as well as Parmigiani Fleurier’s completely diamond-set Tonda 1950. And let’s not forget Breguet’s Reine de Naples, dressed in diamonds from head to toe.

Once the price approaches six figures, three new possibilities emerge. The first is that of pavé pieces, like some of the models from Audemars Piguet’s Royal Oak and Royal Oak Offshore collections. The second is independent fine watchmaking brands, such as Urwerk. This brand, famous for its satellite hours, offers the 103T and 105 in this price range.

Last but not least, there are the tourbillons. Most can be purchased for 100,000 francs in a manufacture version. One could, for example, treat oneself to a Jaeger-LeCoultre Master Tourbillon or a rare Drive de Cartier Flying Tourbillon. Another highly popular form of watchmaking expertise should also be mentioned: ultra-thin models. A Jaeger-LeCoultre Master Ultra Thin Tourbillon can be purchased for under 100,000 francs. This piece is highly prized by knowledgeable watch lovers. A very rare Jaquet Droz Chrono Monopoussoir can also be acquired in this price range.

Experimental watchmaking also fits in to this category. These pieces have high levels of added value and push watchmaking science into new and sometimes futuristic territory. Notable examples include Ulysse Nardin’s Freak, Bovet’s Recital collection and the famous and highly skeletonised Excalibur from Roger Dubuis.

This is the inner sanctum. Nearing the half a million mark, there are still a number of collectors, but the pieces are rarer and rarer. The normal sales dynamic is inverted: it’s no longer a case of knowing what one wants, but finding it. One has to fight hard to get one’s hands on an Excalibur Double Tourbillon from Roger Dubuis, a Chronomètre FB 1R.6-1 from Ferdinand Berthoud or a Zeitwerk Striking Time from A. Lange & Söhne.

Beyond 100,000 francs, a new material becomes accessible: platinum. Among such watches is the Jules Audemars from Audemars Piguet, a piece that has become extremely rare. But there is something more exceptional still: the concept watch. Produced in highly-limited editions, such pieces seek to validate a technical concept but are never intended to be mass produced. The Royal Oak Carbon Concept from Audemars Piguet is one such watch. It can be purchased for under 300,000 francs… assuming you can find one.

Up to and beyond a million

When the bill comes close to seven figures, fine watchmaking knows no limits. This is the price range of choice for Greubel Forsey, which only produces two watches per week. It’s not surprising that the pieces are rare. But at this price, so, too, are the collectors. In any event, when a timepiece is sold for almost a million francs,
the law of supply and demand is a thing of the past.