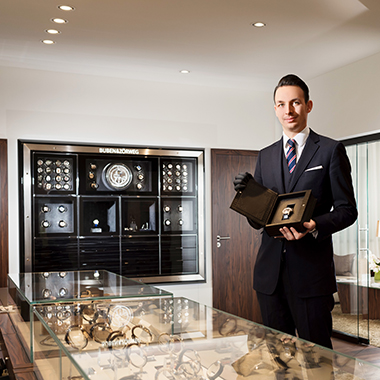 When Cédric Feller welcomes his customers to the Espace Connaisseur of Les Ambassadeurs’ Lucerne boutique, he does not just focus on the technical details. Instead, he is particularly keen to convey the history and the spirit of each brand and manufacture. The Espace Connaisseur Lucerne has between 30 to 50 exclusive models just waiting to be discovered. Cédric Feller presents six of the highlights here.

“The distinctive Amadeo Fleurier 45 Amadeo timepiece by Bovet has a very opulent, almost baroque design. Founded in 1822, the traditional Geneva-based company has created a watch that is technically sophisticated, demonstrated, among other things, by the fact that it has two dials – one on the front and one on the reverse – and can also be worn as a pocket watch. Moreover, the bezel can be adjusted to support the case, allowing the piece to be used as a clock. The guilloché dial and the classic curved Bovet hands are further aesthetic highlights. The watch offers a technically impressive 7-day power reserve. This is a limited-edition collection of 50 pieces.”

“The traditional brand, which made a name for itself by inventing the first chronograph, existed until the mid-19th century. It was revived by Jean-Marie Schaller in 2004. The brand’s chronographic expertise is still discernible today. In the Memoris collection, this complication’s mechanism can be seen clearly on the dial. The single pushbutton to adjust the chronograph, instead of the usual two buttons, is a special feature of the watch. The dial is enamelled, while the iconic case is made of white gold. The blued Côtes de Génève patterning that can be seen on the dial behind the chronograph is another attractive detail.”

“The Girard-Perregaux brand in La Chaux-de-Fonds has a long and impressive tradition. Since its founding in 1791, the manufacture has seen uninterrupted production and has devised over 80 patents as a result. The brand is best-known for its 3-bridge tourbillons. This classic piece has been reinterpreted as part of the Neo Bridges collection. The lower bridge is curved, creating a 3D effect. The piece captivates with the detailed decoration on the dial, designed not to impair the view of the movement and its micro rotor. In my opinion, this watch is characterised by its discreet and subtle styling, making it a perfect match for classic suits.”

“RJ Watches brand, founded in Geneva in 2004, is known for its bold designs. Furthermore, the brand uses unusual materials in its collections, such as original parts from the Titanic. The Donkey Kong model is dedicated to the classic game of the same name. This watch is limited to 81 pieces, the number referring to 1981, the year in which the video game first came onto the market. The dial captures the aesthetic of the world of Donkey Kong. The characters are made of cold enamel. The date display and the chronograph have been removed from the chronographic movement to create a reliable, high-frequency movement. This watch will stir up emotions, reminding today’s 30 to 50-somethings of their childhood or their youth.”

“By virtue of the respective backgrounds of Robert Greubel and Stephen Forsey, the two founders of the brand, Greubel Forsey combines French and English watchmaking expertise with Swiss-made quality. This combination can be clearly seen in the GF02 model, produced as part of an 11-piece limited edition. The front of the watch has a sparkling, sophisticated appearance, reflecting its French lineage. The reverse of the watch is less ornate, a manifestation of English understatement. In addition, the myriad of details found in this model make it highly distinctive. A glance at the dial reveals multiple levels between the individual workings and complications, creating an appealing 3D effect. Technically speaking, the watch features the double tourbillon, characteristic of the brand, which comprises no fewer than 130 individual parts and weighs just 1.13 grams. Further highlights include the frosted main plate, the hand-finished blued screws and the entire movement’s numerous bevelled edges.” Les Ambassadeurs is the exclusive Greubel Forsey retailer in Switzerland.

“The Classic Fusion Tourbillon Cathedral Minute Repeater by Hublot is a watch for aficionados of sound. The watch has a minute repeater with a distinctive clear and pleasant chime. The strike of the minute repeater’s hammer can be followed on the dial, which also provides a fascinating insight into the workings of the watch. The quality of the chime is all the more astonishing because the case is made of rose gold. Other manufacturers resort to titanium in order to achieve optimum sound. The watchmakers’ craftsmanship can be seen throughout this watch: the individual parts are polished, the edges bevelled, and the case elaborately finished with screws. Between the bezel and the case, there is also a layer of Kevlar to protect against impacts.”