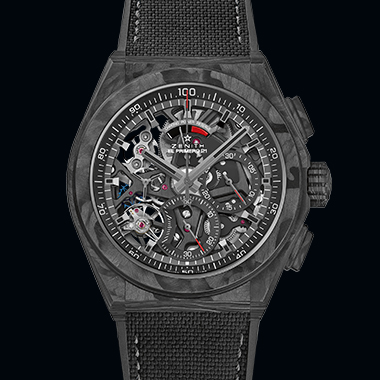 We have not one but two reasons to celebrate! Firstly, we are joining Zenith in celebrating the 50th anniversary of the El Primero chronograph and, secondly, we are proud to announce that from now on we will be offering Zenith products in our boutiques in Geneva, Zurich and Lugano.

So many exciting things happened in 1969: man landed on the moon, hippies celebrated at the now legendary Woodstock Festival for the first time and the first automatic chronograph in watchmaking history, the El Primero, appeared on the market.

It was a novelty that really impressed people. The chronograph ticked at 36,000 vibrations per hour and at the time was the most accurate chronograph in the world. It could measure time to the nearest tenth of a second, and despite its high vph still had a 50-hour power reserve. Designed as a complete whole, it had a column wheel and a central rotor on ball bearings. It had been seven years in the development and the company was rightly proud of it. The chronograph was available in two different versions: one with a date display, the 3019 PHC calibre, and one with a moon phase and triple date display, the 3019 PHF calibre. The appearance was also eye-catching, moving away from dark, tone-on-tone dials and instead using lighter shades such as pale grey and blue.

In the early 1970s, people wanted to know for sure. During one transatlantic flight, an El Primero (Chronomaster) was fastened to the outside of the aircraft body. 20 minutes into the flight, the outside temperature was already -60° and the pressure dropped dramatically at such an altitude. Despite some turbulence during the descent, the clock's movement withstood the flight effortlessly, continuing to beat as accurately as ever. That proved it - the manufacturers had created the most accurate watch in the world.

Today, still just as accurate, Zenith offers us the DEFY El Primero 21 Carbon, a chronograph that, with its open design and special materials, is one of the most unusual editions ever. It comes in a lightweight but very strong carbon fibre case. The fibres are built up in random alternating layers, making every watch virtually unique.

The outstanding technical performance of this legendary movement is still impressive to this day, and we are proud to have the honour of including a brand like Zenith in all of our boutiques.

Explore our Zenith range online or at any of our boutiques.