When every second counts! 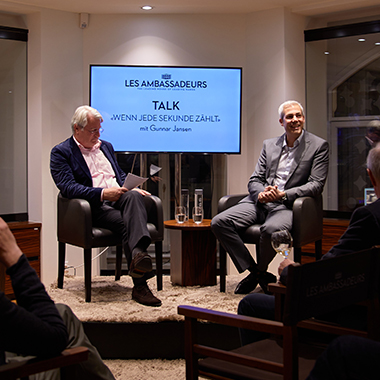 It quickly becomes clear that this man lives and breathes for flying. We invited Gunnar Jansen to be our guest at this year’s TALK. The former chief pilot of the Patrouille Suisse aerobatic team is a ten-year veteran of the Swiss Air Force and led the team until the beginning of this year. This January he set off in search of new challenges. During the animated discussion between Jansen and Kaspar Loeb, you could literally feel his passion for high-altitude adventures.

Gunnar Jansen gave us the inside story and during the discussion he revealed how his passion for flying actually has its origins in his fascination with space travel. Claude Nicollier, a Swiss test pilot for military and civilian aircraft, as well as a NASA astronaut, was his great idol in this respect. The details he shared about the planning of the Patrouille Suisse air shows were nothing less than breath-taking and interesting at the same time.

After the TALK event, Gunnar Jansen was available for further discussion with the audience over snacks and drinks. Last but not least, we want to thank the numerous guests who attended the event and also the two protagonists, Gunnar Jansen and Kaspar Loeb, for their high-energy discussion.