More than just the time - What day is it today? 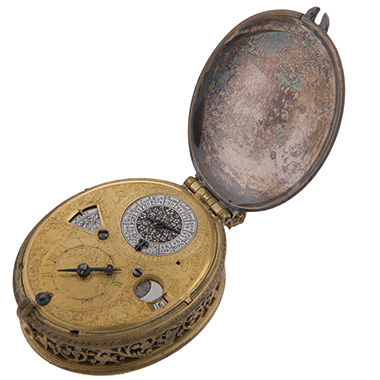 Days are far easier to tell apart than hours : It gets light, it gets dark, it gets light again – a new day begins. Days get longer and then shorter again, repeating in a specific rhythm – a year comes to an end. These observations mark the beginning of the way we measure time : The apparent movement of the sun around the Earth accounts for the way we divide time into days and years ; the calendar.

For early cultures, the planning of sowing and harvest times meant that keeping track of the year and its seasons was vital for survival, while later on, the date (the day of the month) became important for contracts and agreements. This is why even the clocks of the Middle Ages and the early modern age had a date display, often accompanied by images of the planets, such as on the Zytglogge in Bern made in 1530, one of the oldest preserved timepieces in Switzerland. When it was built, astronomy and astrology were still profoundly interconnected. It was believed that the positions of the planets and the moon have an influence on our daily lives, and medical treatments in particular were timed according to the positions of the stars. Thus, knowing the “right” date also had an astrological dimension at that time.

This timepiece (Fig. 2), which was made in France during the early 17th century, belongs to the category of small “astronomical” timepieces which were particularly desirable at court. Marc Girard, who signed this piece, was a watchmaker working in Blois, a centre of the early watchmaking trade and intermittent place of residence of the kings of France, from 1593. He was married there in 1610 and established some important connections. The silver back and cover of his watch are decorated with engraved images based on works by the prominent copperplate engraver and artist Étienne Delaune (circa 1518–1583). These have, however, become less distinct from the watch being worn on the outside of the clothing. The gold-plated brass case is worked with fine fretwork and engraving, and the dial is equally richly decorated with birds, rabbits and vines. One hand indicates the hour on the engraved dial with Roman numerals on the lower part of the watch. At the top, one can read the month and date on a silver underlaid dial. How many days each month has is also indicated here. A little side window displays the day of the week and is complemented by an image of the celestial body attributed to it, symbolised its corresponding ancient deity : The moon or the goddess Diana for Monday, Mars for Tuesday, Mercury for Wednesday, Jupiter for Thursday, Venus for Friday, Saturn for Saturday and the sun for Sunday. Opposite this display, there are more little windows which show the phases and age of the moon.

A few years earlier, Pope Gregory XIII’s calendar reforms had made drastic changes to the date which even Catholic countries hesitated to introduce : Thursday 4th October 1582 was to be immediately followed by Friday 15th October 1582. The number of leap years was to be reduced compared with the Julian calendar, which had been accepted until then. This readjustment had become necessary because the astronomical beginning of spring on 21st March, which was so important for calculating the date of Easter, was no longer in accordance with the position of the sun. Although almost every European country, even the Protestant ones, had accepted the Gregorian calendar by the mid-18th century at the latest, contracts were still signed with both dates for a long time, and calendars showing both the old and new dates, as well as information about the phases of the moon and positions of the planets, were made for many years. An example calendar sheet is shown above (Doc. 1) : This sheet comes from a calendar for the year 1796. It is easy to imagine that people in those days often looked at the date display on their watches to double check that they had the “right” date.

In around 1790, “Robert et fils et Compagnie” made this double-face pocket watch (Fig. 4) in La Chaux-de-Fonds. Its cleverly designed dials and displays reflect the age of rationality. The elegant black and white dial on the back of the watch allows the owner to read the hours and minutes of the day in Arabic numerals on the white background and those of the night in Roman numerals on the black background. The phases of the moon are also shown on this side of the watch. On the white enamelled dial on the main side, with the large second hand in the middle, there are two small auxiliary dials : The lower one again shows the time of day in hours and minutes, while the top one displays the day of the week and the date – and in a clever way at that : The long tapered point on the other end of the hand indicating the day points to the graphic symbol (which is still used today) for the planet corresponding to that day of the week. The other hand on this dial points to the correct date. The two ends of the second large hand on the main dial indicate the month in a similar way : With one end, it points to the abbreviated name of the month with the number of its days ; with the other, it points to the corresponding sign of the zodiac.

Another double-face pocket watch (Fig. 6), probably made in southern Germany in 1820, displays the date in a completely different way : On the large dial, there are seven small auxiliary dials, each with its own hands, which display the following information : The time in hours and minutes is in the middle, then the dial at 12 o’clock indicates whether it is day or night ; the one at 2 o’clock displays the day of the week, the one at 4 o’clock shows the seconds, the one at 6 o’clock shows the phases and age of the moon, the one at 8 o’clock shows the date from 1–31, and the one at 10 o’clock finally shows the name of the month and the number of days it has. Among other things, the design of the display with its auxiliary dials leads us to assume that this timepiece was made near Stuttgart in the vicinity of Philipp Matthäus Hahn (1739–1790), who is a very interesting character : Trained as a pastor, he dedicated himself to watchmaking from an early age. In the spirit of the Middle Ages, he made Christian chronological tables tracking salvation history, but he also invented precision instruments such as scales, and built early calculators. Carl Wagner, the man thought to have built this watch, was probably one of his many students.

This pocket watch (Fig. 7), built by Ulysse Oppliger in La Chaux-de-Fonds in 1880, seems almost like a modern mechanical watch. The dates 1–31 are indicated on a section of the main dial by a long hand in the middle. There are two small auxiliary dials for the days of the week and month. You can see the phases of the moon through a little window, and the small hand in the middle indicates whether the month has 28, 29, 30 or 31 days. In contrast to the other watches presented here, all of which need to be reset by hand at the end of each month, this one has a fascinating technical peculiarity : It possesses a “perpetual calendar”. This means the date display automatically switches to the first of the next month regardless of how many days the previous month had. Even leap years, which come every four years and when February has 29 days, are observed by this watch – but not, however, those exceptions identified by the Gregorian calendar : If the date can be divided by 100, it is not a leap year. That said, if the date can be divided by 400, then it is a leap year again. Occasionally, modern mechanical watches are built which also take note of these exceptions. This very elaborate extra function can accurately illustrate the solar year.

Excerpt from the book from Monika Leonhardt „More than just the time: Complication watches at the Musée international d’horlogerie“, Neuchâtel: Alphil, 2018