Off to the moon! 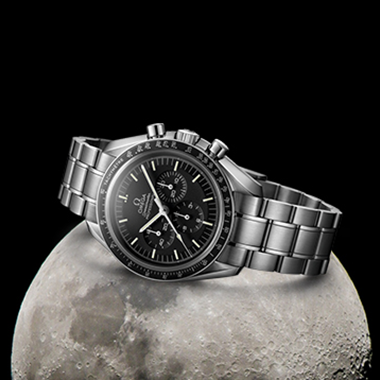 Looking back to 50 years ago

The 20st day of July 1969 is enshrined forever in the history of humanity. It was on this date that a person dared to take the first step onto an unknown sphere – the moon. It was not just a giant leap for humankind, but also for Omega. On that day, all of the astronauts on the Apollo 11 mission wore an “Omega Speedmaster Moonwatch” on their wrist.

Let’s take a look back at the creation of that watch. The first model of the Speedmaster was unveiled in 1957. At that time, however, no one could imagine ever visiting the moon. Furthermore, the Speedmaster was not designed specifically with a journey into space in mind, but rather as a normal sports watch with a chronograph feature. Since the watch had a diameter of 39 mm, there was enough space to place a tachometer scale on the bezel for the first time to measure speed.

During preparations for the Apollo mission, NASA was looking for a suitable watch for use in outer space. The aim was a timepiece that could withstand the extreme conditions and demands. Several models from various watch brands were put through radical testing. Among other things, they were tested for functionality in zero gravity, shock-proof features and resistance to strong magnetic fields. The Omega Speedmaster was the only watch to score positively in all areas.

In 1962, the first space rocket lifted off into the cosmos with the Omega Speedmaster on board. In 1965, three years after the first test flight, the timepiece was given its official title as the NASA wristwatch.

After the successful moon landing, every “Moonwatch” has been inscribed with the words “First Watch Worn on Moon”. Today, the watch looks almost exactly the same on the outside, and a hand-wound version with a hesalite crystal is still available. Although the interior of the watch has changed somewhat, the movement remains practically identical.