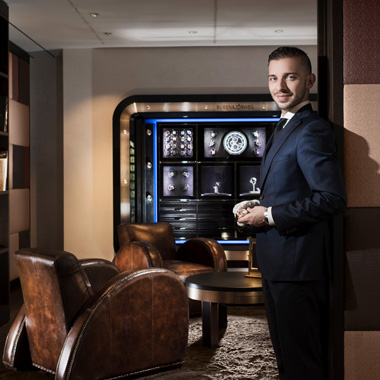 Timepieces at the Espace Connaisseur of Les Ambassadeurs’ Zurich boutique will exhilarate even the most seasoned enthusiast. A selection.

For two years, Fabian-Diego Ackermann has been at the helm of the Espace Connaisseur on the second floor of the Les Ambassadeurs boutique in Zurich, where he offers his customers a glimpse of the finest collector’s items. “Most customers are very well-informed, so we often have very interesting conversations,” he says. Below, he presents six highlights from his collection.

“Parmigiani Fleurier has been collaborating with French automobile brand Bugatti since 2004. The Bugatti Super Sport has a streamlined shape, which is reminiscent of the design of their cars. The time can be read from the front, which is very useful when driving, as the wrist does not have to be turned. Its crystal, created especially for this watch, has a beautiful shape. The special design of the case allows the inner workings of the watch to be seen from all sides. It features an additional tactile element, in the form of its large crown. This model is part of a 30-piece limited edition.”

“Based in La Chaux-de-Fonds, Robert Greubel and Stephen Forsey have been creating complex watches since 2004 that feature high-quality materials and keen attention to even the smallest details. The GMT model demonstrates its appeal through its multifaceted face. It indicates the time as well as power reserve levels, and is complemented by a second time-zone display as well as a titanium globe, which indicates day and night times for locations throughout the world. An additional highlight that stands out is the tourbillon, which is tipped at an angle of 25 degrees. The watch consists of over 400 individual parts. The final assembly is impressive: for example, it takes up to a week for the black polish of one screw head to be completed. Its case has a very unconventional shape, which gives the watch an exotic character.” Les Ambassadeurs is the exclusive Greubel
Forsey retailer in Switzerland.

“This Neuenberg-based brand is known for its hand-less watches, which instead indicate the time with liquid. The H2 model is no exception to this: two cylinders control transparent green and red liquids in a glass tube, which forms a circle around the watch face. The hours are indicated when the green liquid expands clockwise in the glass tube. The mechanism behind this is time-tested; the liquids interact with one another without mixing together. The transparent design of the face beautifully showcases the watch’s inner workings. The design of the H2 Collection is the result of collaboration with Audemars Piguet (Renault & Papi). The bellows are positioned at 6 o’clock and are set at a 45o angle in a ‘V’ shape, resembling the aesthetic design of a high-grade automotive engine. This association becomes even more obvious, as the crown can be shifted to ‘H’, ‘N’ or ‘R’ positions, which stand for ‘hour’, ‘neutral’ or ‘reverse’. This model was produced as part of a limited edition of 50 pieces.”

“What I love about this model is the abundance of details. Its case has grooves on the sides, and the face features five different guilloché patterns. On top of this, there is still much more to see: next to the hour hand, there is a second hand, a tenth-of-a-second hand, and a power-reserve indicator. The highlight of this watch, however, is without a doubt its precision. Unlike most other timepieces, which have a 2–3 Hz escapement, the Classic Chronométrie is powered by a 10 Hz escapement. That means that the balance can reach 72,000 oscillations per hour. To reduce wear due to the fast balance, Breguet invented the magnetic pivot. Thanks to the magnet, the balance does not touch the pivot and there is no friction between these pieces.”

“This model breaks away from the Geneva brand’s typical formula, which mostly focuses on hyper-futuristic styles. The face is extremely clean and not a skeleton dial, as we usually see with Urwerk, which gives the watch a certain elegance. What makes this model special is that it has an electronic element that allows the wearer to view time accuracy. Its hand-wind mechanism produces energy, which activates its display. Then, one of the hands will shortly display its accuracy to a precision of +/-15 seconds per day. Furthermore, there is an LED accuracy indicator light that will turn green when precision falls between -5 and -15 seconds, or red when this threshold is exceeded. Afterwards the wearer can make fine adjustments, which enables an interesting interaction with their watch.” Les Ambassadeurs is the exclusive Urwerk retailer in Switzerland.

“This watch features a breathtaking face design, with its visible interior mechanical elements. Its most noteworthy feature is the so-called “flying tourbillon”. With this technique, the bridge is only mounted at the base of the tourbillon, so that the wearer has full view of any complications. Roger Dubuis is a brand that is very well known for its extroverted shapes. Additionally, it is one of the few brands which can boast the Geneva Seal.”