The most expensive Easter egg in the world 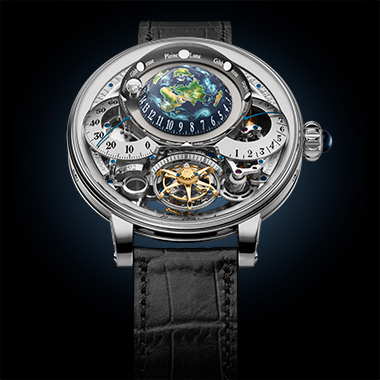 A masterpiece of fine watchmaking

The packaging in the shape of an egg, adorned with constellations, boosts the anticipation surrounding this masterpiece to infinity and beyond. Inside awaits the Récital 22 Grand Récital by Bovet, a very deserving top winner of last year’s Grand Prix d’Horlogerie de Genève. This exquisite model incorporates a display of the sun, earth and moon. The half-globe circles its own axis and replicates the earth’s natural 24-hour orbit.

The raised carriage of the tourbillon is a particularly elegant detail from Bovet. Its design is characterised by a fixation point – the sun – in the centre of the axis. The five arms frame the regulating organ and resemble the extended corona of the sun.  The earth rotates once around its own axis every 24 hours, just like in real life. At the base of the globe, a graduated scale displays the hour by means of a three-dimensional index, situated between the tourbillon and the globe. The black-and-white ring that circles the earth reveals which part of the globe is currently dark.

The moon orbits the earth completely once every 29.53 days, to be precise. The watch’s moon display only needs to be adjusted once every 122 years. Part of the moon’s sphere is black, while the other is engraved and filled with a luminescent material. This allows the wearer to determine which part of the moon is reflecting the sun’s light at any specific moment.

A truly impressive and stunning piece of watchmaking artistry!