Guest talk by Enrique Steiger at Les Ambassadeurs in Lucerne 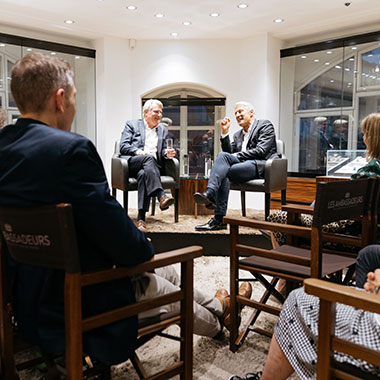 On 14 September 2018, the Les Ambassadeurs boutique in Lucerne hosted a talk with probably the best-known plastic surgeon in Switzerland: Enrique Steiger.

His reputation ranks among the best - even Hollywood stars go under Mr Steiger’s knife. As well as this, since 1989 the native of Zurich has operated on war victims from all over the world free of charge and travels himself to particularly dangerous areas to offer his assistance on the ground. This life in two completely different worlds and times shapes a person accordingly.

In a pleasant atmosphere, Enrique Steiger passed on his enthusiasm, his boundless passion but also his difficulties in his profession to the invited guests. He gave a glimpse behind the scenes of plastic surgery as well as an insight into the dangers of the global crisis areas in which he has previously worked.

At the end of the talk, many questions were taken from the audience, and a lively discussion ensued. Stimulating conversations continued during the cocktail party that followed.

We would like to thank Kaspar Loeb for his moderation, and Enrique Steiger and all those present for an extraordinarily frank and exciting evening.