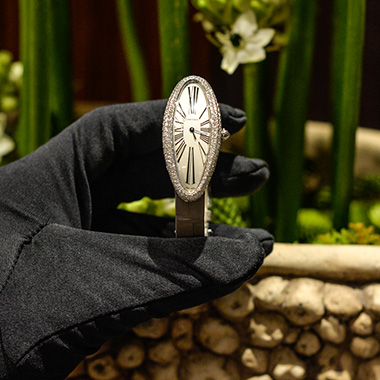 The first Espace Connaisseur event of the year was devoted entirely to the SIHH 2019. It was a unique chance to be among the first to see this year’s innovations at Les Ambassadeurs. The presenters introduced the invited guests to the selected models, which could be admired and tried on afterwards.

Les Ambassadeurs would like to take this opportunity to thank its partners of the brands for making this exceptional opportunity possible.

We would now like to share with you a selection of the latest models that were displayed at the event:

The Cat’s Eye collection is a fitting ambassador for women’s watches. Just like women themselves, it never stops refining its appearance while highlighting the uniqueness of its own character. A poetic small complication, a flower acting as small seconds circles once a minute and reminds its wearer of the fundamental element of watchmaking. Its inner mechanical movement is visible through the rhythmic sweeping motion of the subtly engraved oscillation weight. This floral symbol is an attractive detail that also graces the crown.

The story behind this watch goes back to the beginning of the 1930s with a proposed challenge to design a model that was durable enough to withstand the polo matches played by officers of the British Army in India. When the case is swivelled and turned over, the dial is completely protected from possible impacts. This model has a steel case with 56 diamonds weighing 0.63 carats each now adorning both its back and front.

Panerai Submersible
Bezel made of Carbotech

Panerai presents two new professional diving watches made of Carbotech.  Carbotech is a carbon-fibre-based material introduced by Panerai. It is lighter than steel yet still very robust and resistant to corrosion. The variegated matte black optics defines the watch’s distinctive character.

In 1904, Brazilian aviator Alberto Santos Dumont wanted to be able to keep track of the time while flying. Louis Cartier fulfilled his wish by creating a wristwatch that cemented the friendship between these two pioneers. The legendary watch stands out from the crowd with its rounded corners, harmoniously curved lugs and distinctive screws. The latest version is the Santos Chronograph, this time in steel with a black rubber bracelet.

The appearance of the new RJ ARRAW The Joker watch reflects its comic-book namesake, who also happens to be Batman’s nemesis.  Design cues linked to the flamboyant villain can be found all over the watch – from the lethal razor-tipped playing cards on the bezel to the striking Joker make-up on the dial.

The name hearkens back to a legendary model from Vacheron Constantin from the year 1956. This watch combines elegance with cosmopolitan style and derives its striking character from the contrast between classic dial and striking case. This latest version is now available in blue and is even more enchanting.