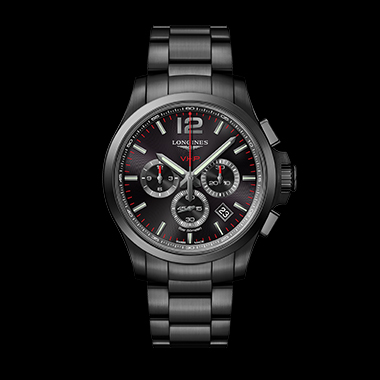 What is Longines’ V.H.P. technology?
Xavier Ligero: The Very High Precision system signifies a quartz movement offering ultra-high preci­sion and opening the way for several develop­ments, such as the Conquest V.H.P. GMT Flash Setting, launched in 2018, which allows easy time correction for a second time zone. It is another milestone in Longines’ long history of innovations. In 1954, the brand created a first quartz clock, which set a new record for preci­sion at the Neuchâtel Observatory. It equipped the mythical Chronocinégines, a timing instru­ment that played a pioneering role in the field. A giant leap forward was made in 1984 with the ultra-precise quartz calibre of the very first Conquest V.H.P., the precursor of this model.

Nicolas Schuldiner: It is a system of formidable precision with its ± 5 seconds per year. The Conquest V.H.P. offers a perpetual calendar as well as resistance to both shocks and magnetic fields thanks to its automatic resetting system. The watch’s capac­ity to check itself every day and, if need be, to make its own corrections is unique.

What does it bring to the watch?
Xavier Ligero: First of all, the ultra-precision of ± 5 seconds per year. Then the DPR, a system for the resetting of the hands after a shock or exposure to a mag­netic field, in order to ensure the precision of the time display. The Conquest V.H.P. system also includes an intelligent crown that makes manipulation easier. Additionally, there is an end-of-life indicator for the long-life battery (which lasts more than four years). Finally, the watch possesses a perpetual calendar whose date function automatically determines the month lengths and leap years up to 2399.

Nicolas Schuldiner: First of all, precision. This is the first thing that we ask of a well-made watch. In this respect, the Conquest V.H.P. goes well beyond the stand­ards. Then its ease of use. The self-checking and automatic resetting are operations that you no longer need to carry out yourself. It is an intel­ligent watch that you don’t need to manage. Magnetism and shock worries become a thing of the past.

For whom is the V.H.P.- equipped Conquest collection intended?
Xavier Ligero: Like the majority of the Longines collections, for men and women equally, who are keen to acquire a modern, sporty, precise and resist­ant model combining technical sophistication and elegance, while offering high quality at the best price. Regarding its technical aspects, this model also stands out for its ease of use and its practicality, a single initial setting sufficing for its proper running over several years.

Nicolas Schuldiner: The young, thanks to its style and very attrac­tive positioning, but not only. It will also appeal to lovers of watchmaking technology. This watch is also suited to sport enthusiasts, with its looks and the robustness of both the movement and the case. I’m thinking in par­ticular of skiers in the habit of tackling moguls, which will present no problem. Finally, it will make a very nice travel watch, sober and ele­gant. In terms of functions, Longines could make use of the movement’s capacities to complete the perpetual calendar with day and month indications.

More about the watch.