A premium concert – with Les Ambassadeurs and Frederique Constant 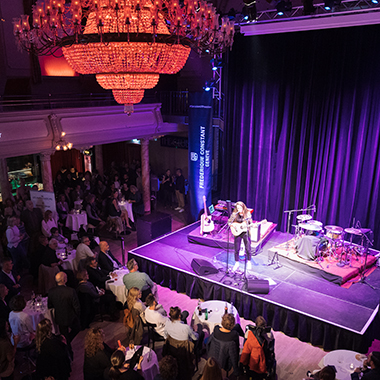 On 4 October 2018 Les Ambassadeurs organised a premium-class event - a VIP cocktail reception with a concert to follow at the Grand Casino Lucerne in cooperation with its partner Frederique Constant and to celebrate the watch brand’s 30th anniversary.

Niels Eggerding, CEO of Frederique Constant, Joachim Ziegler, CEO of Les Ambassadeurs, and boutique director Andrea Marco Brüesch welcomed their guests for an enjoyable cocktail reception at the Les Ambassadeurs boutique in Lucerne at the Kapellplatz. Later on, the City Train, hired exclusively for the occasion, conducted guests to the Casineum on the lake for a double concert with Swiss newcomers Veronica Fusaro and Marius Bear. The concert was not reserved for the VIP invitees alone, however, as other guests who had won tickets also attended.

The sold-out concert was a resounding success. Thanks to an incredible atmosphere, the artists completely enchanted the audience and transported listeners to another dimension. At the concert all of the guests also had the chance to participate in a contest and win a Frederique Constant watch. The winner will be announced next Thursday, 11 October.

Les Ambassadeurs was very pleased with the successful evening and would like to take this opportunity to once again wish its partner Frederique Constant a very happy anniversary.