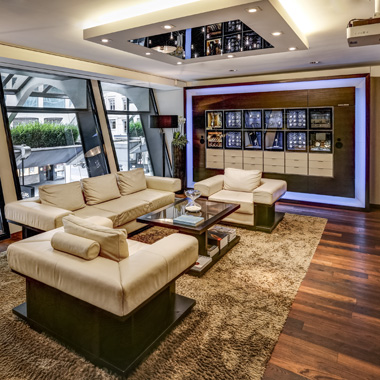 Among the treasures of Greubel Forsey is the new GMT Earth. It was presented last January at the SIHH and is recognized as one of the most beautiful and complex timepieces dedicated to globetrotters. A limited edition that stands out as a centrepiece of the “Espace Connaisseur”. A spot envisioned by Les Ambassadeurs for lovers of high quality watchmaking.

“We are sculptors of time, choreographers of the flying hours, and architects of clocks’ mechanics. With a screwdriver instead of a paintbrush, a mechanical pencil as an ink pen, and steel or gold for support”, this is how the founding duo Robert Greubel and Stephen Forsey picture themselves.

The first is the son of a watchmaker whereas the second has always been fascinated by the notion of time. Having become watchmakers, both rich in experience amongst prestigious workshops, the founded Greubel Forsey in 2014.

Fine watchmaking is, however, not the only thing that fascinates them. Stephen finds peace in vintage cars, architecture, and nature, whereas Robert adores arts under all its forms. This explains why the Greubel Forsey timepieces are different from others since they wonderfully combine arts and Swiss watches’ mythical mechanical watchmaking. Great complications and crafts have never been so well matched…
Greubel Forsey today continues to offer collectors original timepieces thanks to their inventiveness, chronometric performance, and excellence in handmade decorations and finishes. Nobody would dare say the contrary after discovering, at the SIHH last January, their workshop's 2018 vintage creations, which includes the new GMT Earth. A creation molded for modern times…
The advent of transportation has given men the chance to travel further, more often, and faster. The so-called GMT, Greenwitch Mean Time, watches allow us to know the time in every continent, which has established them as a must.
This complicaton has another, and, perhaps, greater reason to be explored by Greubel Forsey as it may call for and play with both artistic and high quality watchmaking.
Remarkable exhibit of the GMT Earth, which offers a complete and three-dimensional vision of the terrestrial globe, from the North to the South Pole. The planet seems hanging in the heart of the dial. Located at 8 o’clock, protected by a bubble in sapphire crystal, it offers to the eyes of the collectors a show on both sides, not to mention a side view of the equator.
A unique show, to which is added the simultaneous reading of time in three different time zones. The first on the off-center hour and minute dial, the second on an adjunct dial, and, finally, the third on the 24-hour gradated ring whose day-night indicator surround the globe. Finally, as good surprises never come alone, the calibre also offers a power reserve gauge and a tourbillon inclined at 25° whose cage performs a complete rotation in only 24 seconds. A mechanical wonder, which is none other than Greubel Forsey's third Fundamental Invention. The craft's transparency emphasizes on the micro-engravings found inside the bezel made of sapphire crystal.
An exceptional timepiece to consider as a real treasure that shows the unique savoir-faire of Greubel Forsey.

A show that makes perfect sense in the “Espace Connaisseur” designed by Les Ambassadeurs. A salon both bright and intimate concealed on the first floor, in which we feel at home. A watch library, sofas, and a coffee table stand alongside a selection of timepieces, which could move any collector.
As many delegates of fine watchmaking as the great Swiss tradition wants great complications, rare calibres, and jeweler versions since the “Espace Connaisseur” does also thinks of women.
A dream come true in this place where meetings between specialists and amateurs and collectors occur, in search of watchmakers and difference, by virtue of their motivation for discovery and knowledge in the field of fine watchmaking.
Article by Cote Magazine July/August 2018